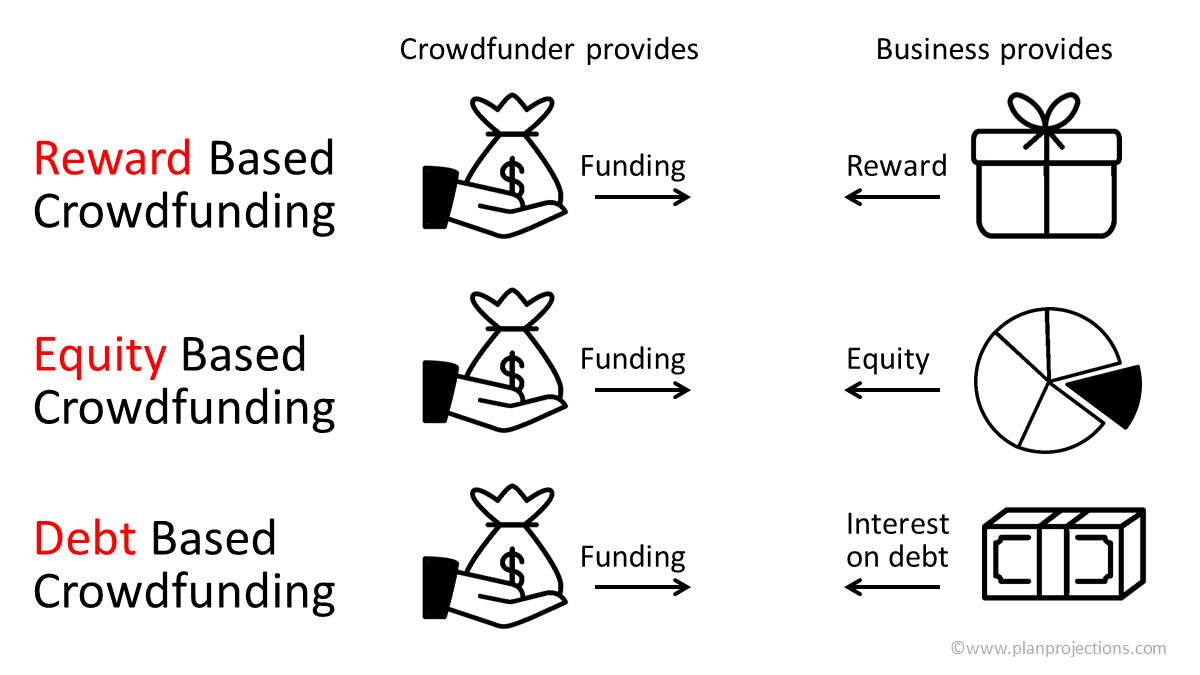 The benefits of crowdfunding are that it generally makes it easier and cheaper for a start-up business to gain access to larger amounts of funding, and spreads the risk for each individual backer, as only a small amount of money is involved.

Crowdfunding websites are multi-sided platforms which allow interaction between fundraisers (the business) and the crowd (the potential financial backers). The purpose of the crowdfunding platform is to allow a fundraiser to pitch its idea and request a target amount of funding and for the crowd to pledge money to finance the idea. The crowdfunding platform offers a secure method of interacting, together with other services, and in return charges a fee to the fundraiser.

There are many forms of crowdfunding, but generally they fall into three main categories which are identified by the type of return the crowd funders receive for their financial pledges.

In rewards based crowdfunding the crowd funders receive a non-financial reward in return for their pledges. The crowdfunding rewards are set and provided by the business raising the funds and typically vary depending on the level of the pledge from the crowd funder. For example, a business might provide goods or services as their project is developed.

In addition to providing much needed finance, reward crowdfunding is often used by a business to create consumer interest which in turn generates a customer base and orders for the product prior to its launch.

The main point about rewards crowdfunding is that in return for the funds, the business simply has to deliver the stated reward on time as promised, and does not have to release equity in the business or repay the funds received.

Reward based crowd funding is particularly suitable to a business which produces a simple, original and creative product which can provide an easily understood reward to the crowd.

Equity based crowdfunding requires the sale of equity in the business to the crowd in return for their investment, and is often subject to securities and financial regulation. The process is similar to normal private, angel or venture capital equity funding, but has the advantage that it can be less costly than the other methods. Having said that, the business may still incur substantial legal, advisory, administrative and success fees.

Equity crowd funding is often used by startup businesses as, unlike debt crowd funding, it does not necessarily require the business to have a trading track record or the ability to make loan and interest repayments. It does however mean that the business has to sell equity to investors, usually giving away voting rights on key aspects of the business.

The crowd equity funding platforms are usually required to carry out limited due diligence, and the business may be required to supply additional information including details of how much equity it wishes to sell and at what valuation, together with a business plan and financial projections .

In debt based crowdfunding the crowd lends money to the business, for that reason it is often referred to as crowdlending. It is a form of peer to peer lending and is similar in nature to any other form of borrowing.

In return for providing the funding, the crowd lender should receive a fixed repayment schedule for the debt together with interest payments at a fixed rate of interest. The actual interest rate will depend on the exact terms of the crowd funding project, and is often set on the basis of bids from the crowd lenders. Usually, the crowdfunding debt repayments are made to the platform who in turn make payment to the individual lenders.

The crowdfunding platform has a duty to protect both the business and the crowdlenders and therefore carries out due diligence on each loan transaction.

The main benefit of crowdfunding to the business is that it may be able to obtain debt finance which might not have been available from a traditional bank. In addition, due to the bidding process, the interest rates obtained might on average be lower than those normally available to the business.

Debt based crowdfunding requires a financial and trading track record together with an ability to make the interest and loan repayments, and for that reason is normally used by businesses which are already trading and generating cash. A typical prelaunch start-up business does not normally satisfy these criteria, and therefore would usually seek reward or equity based crowdfunding.

Crowd funders expect you to have a good understanding of the business and its future development. One way of demonstrating this to them is to have business plan and a set of financial projections showing the impact of the anticipated crowd funding.

The rules as to how crowdfunding is treated are still being developed and depend on the type of crowdfunding (rewards, debt, equity) used, if in doubt professional guidance should be sought.

To give an indication in the financial projections template of the impact of any crowdfunding use the following guidelines.

If the amount is to be regarded as income, include the crowd funding as part of revenue, and the cost of providing the rewards as part of cost of sales or expenses depending on the nature of the reward.

Include the crowdfunding equity amount in the cash flow under the heading ‘Proceeds from issue of share capital. Further details of the treatment of capital can be found in our How to estimate startup capital tutorial.

As with any other debt, include the amount and the repayment term of the debt in the cash flow under the heading ‘Proceeds from long-term debt’. In addition, the interest rate should be reflected under the heading ‘Finance costs’ in the income statement. Further details of the treatment of debt finance can be found in our Estimate new debt tutorial.