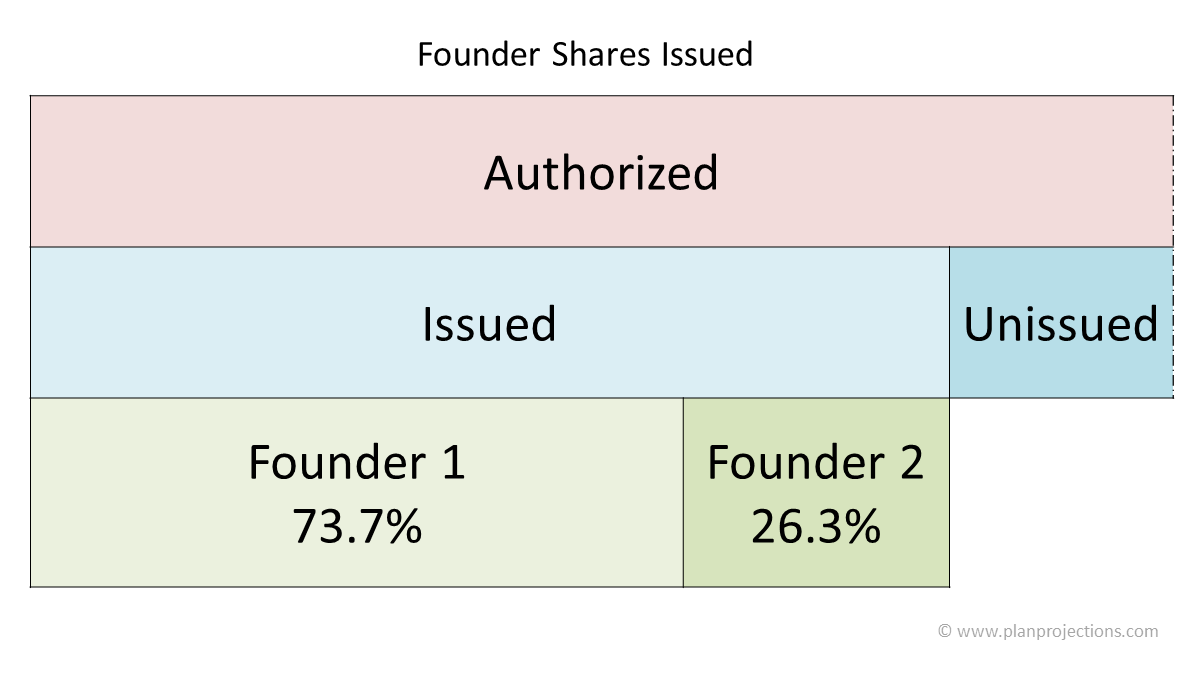 A pre-investment cap table or capitalization table is simply a list of shareholders and their shareholdings in the stock of a company prior to any investment being made.

When a startup business is established as a company the founders are normally granted common stock to reflect their relative ownership of the company. This ownership is usually stated as a percentage so for example one founder might own 75% and another 25% of the company. The important point to remember is that the total percentage ownership must always add up to 100%.

The number of shares each founder gets is decided on between the founders depending on their contributions in terms of cash investment, expertise, commitment and risk, responsibilities and the amount of time they invest at reduced or zero paid salary. Our startup equity calculator is available to help you decide on the equity split between founders.

The legal formalities for establishing a company include defining the maximum number of shares the company can issue, this maximum is referred to as the number of authorized shares.

The authorized shares can then either be issued to shareholders or remain unissued and available for a later date. 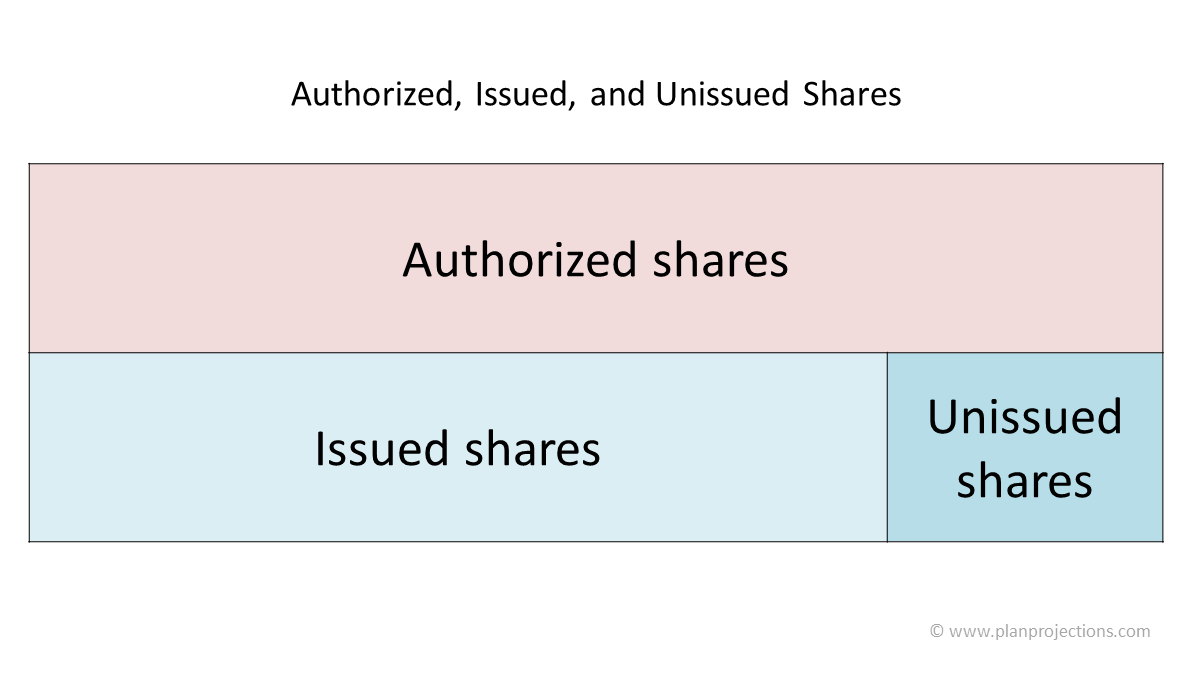 It is the number of issued shares held by each shareholder which determines their percentage ownership. The authorized shares simply determines the maximum which can be issued.

So for example if a shareholder owns 12,000 shares and the total number of shares issued is 48,000, the percentage ownership is calculated as follows.

The shareholder owns 25% of the company.

The pre-investment cap table is not a legal document and has no set format. Usually the cap table is set out in a spreadsheet with columns defining at least the holders name, the number of shares held and the percentage ownership the holding represents. Other information such as issue dates, price paid and valuations can be included as required.

Shares are Issued to The Founders

After the issue, the pre-investment cap table will show the following.

The percentage shown in the capitalization table is the percentage of the company each founder owns calculated as follows.

Since these are the only shares in issue the founders own 100% of the company summarized in the diagram below. The diagram is not to scale.

It should be noted that in this simple example the unissued shares are not used in the calculations and have no effect on the founder ownership percentages. Since 950,000 shares have now been issued from the authorized shares of 5,000,000 there are 4,050,000 shares remaining unissued to be used at a later date.

Shares issued to Members of the Team

At a later stage the founders decide to award 50,000 shares to members of their team. For the purpose of this example the team might refer to employees, consultants, or advisers but represents people other than the founders of the business who are being rewarded for services they provide.

Following the issue the pre-investment cap table will be redrawn as follows.

To award the team their shares the company issues a further 50,000 shares from its remaining 4,050,000 unissued authorized shares. With the additional shares the number in issue is now 1,000,000. The percentage held by each holder is calculated as follows.

The relationship between the authorized and issued shares is summarized in the diagram below. The diagram is not to scale. 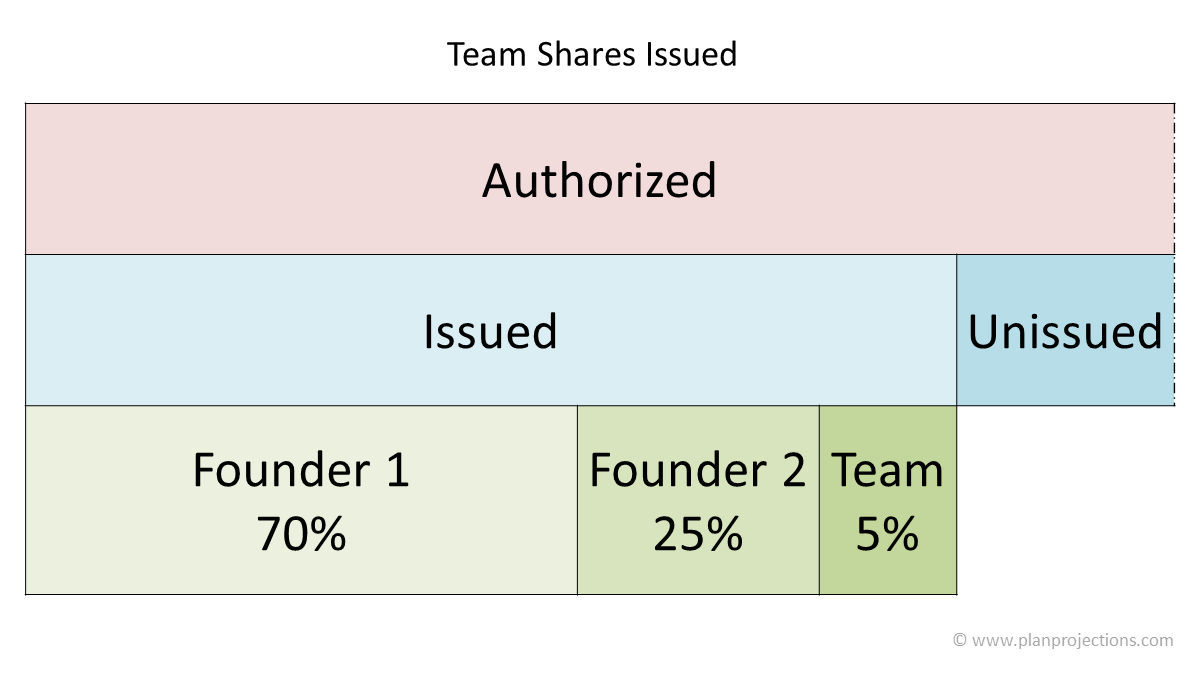 Again, the unissued shares are not used in the calculations and have no effect on the ownership percentages. Since 1,000,000 shares have now been issued from the authorized shares of 5,000,000 there are 4,000,000 shares remaining unissued to be used at a later date.

Effect on Founders and Dilution

The table below summarizes the effect of dilution on each of the founders.

In the above example the pre-investment cap table shows that team is awarded 5% of the issued shares and the founders are therefore said to be diluted by 5%.

Where % before and % after are the respective shareholder ownership percentages before and after dilution.

Founders Must Pay For Equity

As part of the legal formalities stock is defined as having a face or par value. The par value simply defines the minimum value that a shareholder can pay to acquire each share.

Suppose in the above example the par value of the common stock is 0.001 for each share. Providing there was minimal value in the business when the shares were issued then the cost to each holder is calculated using the following formula and summarized in the table below.

The above example showed that the total cash received from the founders and the team was 1,000. Although minimal, the amount represents equity of the business and needs to be entered in the financial projections template as either startup capital in the opening balance sheet or alternatively as new capital in the cash flow for year one.

In practice it is recommended that the plan is developed first using the financial projections template to determine the amount of equity capital needed to fund the business. These amounts can then be referenced back to the pre-investment cap table to determine how the necessary capital will be provided. In any event, the capital required by the financial projections template should always agree to the capital shown in the pre-investment cap table.

This post discusses pre-investment cap tables for startups before any complications arise. As the business progresses the company will need to consider among other things creating an options pool to reward employees, issuing convertible notes to raise finance, and issuing shares to investors at various stages of growth to obtain additional funding. All of these matters utilise the remaining unissued shares, impacting the startup cap table, and will be the subject of future posts.