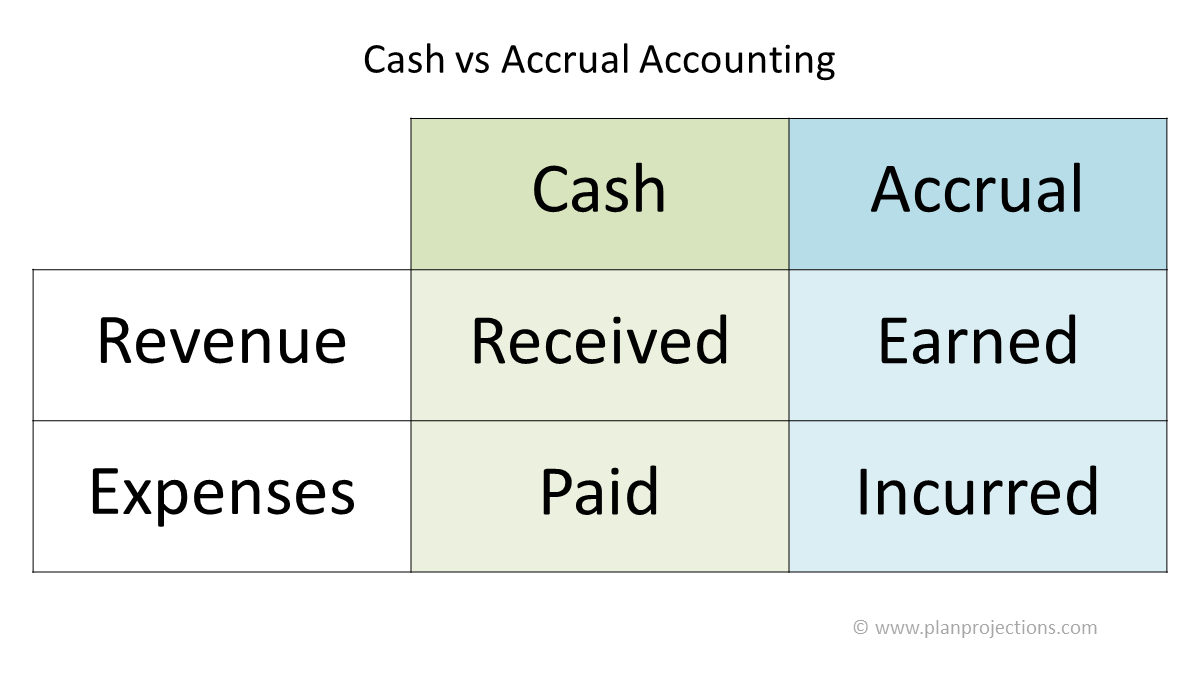 Cash vs Accrual Accounting and Revenue

A simple example will serve to show the difference between the two methods. Suppose a business is preparing income statement financial projections, and plans for revenue of 300, 400, and 500 in months 1, 2 and 3 respectively (in months 4 and 5 we will assume for the sake of demonstrating the point, that the revenue is zero, although in reality the projection would continue). If also plans to offer two month credit terms to customers, meaning that the business will receive cash from customers two months after supplying the goods.

Under the cash basis of accounting, the business will show the revenue when the cash is received as follows:

The two months credit offered to customers result is no cash being received in months 1 and 2.

However, under the accrual basis of accounting the revenue is recorded when the the revenue is earned (goods dispatched and invoiced to customers), and the financial projections would be presented as follows

Cash vs Accrual Accounting and Costs

To understand why which accounting basis is chosen matters we need to look at the costs used in the financial projections. Suppose in the above example our costs were 120, 160, and 200, and these were incurred with a supplier who gave the business one month credit terms (meaning the business pays the supplier one month after receiving the supplies). If again, we compare the cash vs accrual accounting methods by preparing the financial projections we get the following.

In the cash basis of accounting the financial projections show when the cash is paid to the supplier which, due to the credit terms, is one month after the benefits of those costs have been received by the business.

In the income statement, under the cash basis of accounting, there is no apparent relationship between the revenue received and the costs paid in a particular month.

It should be noted that in both cases the total net income for the five months is the same at 720.

The above example showed what happened when revenue and costs are not matched due to the use of credit terms, however, the situation becomes even more distorted when capital equipment or inventory are purchased. Under the cash basis of accounting the full cost of the equipment or the inventory would be included when paid for, whereas under the accrual basis of accounting only a proportion of the cost of the capital equipment relating to its usage (depreciation) would be charged each month, and only the inventory used during the month to produce the goods which are sold, would be charged to the income statement.

Advantages and Disadvantages of Cash vs Accruals

Cash accounting is objective and easier to carry out, cash either comes into the business or goes out of the business. However, the cash method of accounting makes no attempt to match costs to the revenue it generates. The method produces a distorted view of earnings, and does not comply with generally accepted accounting principles, and should not be used to produce financial projections.

The accrual basis of accounting is initially more difficult to understand, but is the preferred method to use for preparing financial projections as it ensures that expenses are matched to revenues and therefore more accurately measures the current earnings of the business. As the accruals basis is in accordance with generally accepted accounting principles, it is the method which investors, and lenders would expect to have been used when they are reviewing financial projections.

Our financial projections template uses the accruals basis of accounting. It does this by using days sales outstanding, and days payable outstanding to allow for the credit terms, and by adjusting for opening and closing inventory using inventory days. In addition, it matches the cost of capital equipment purchased to the revenue it produces by allowing for the depreciation expense over the life of the equipment.